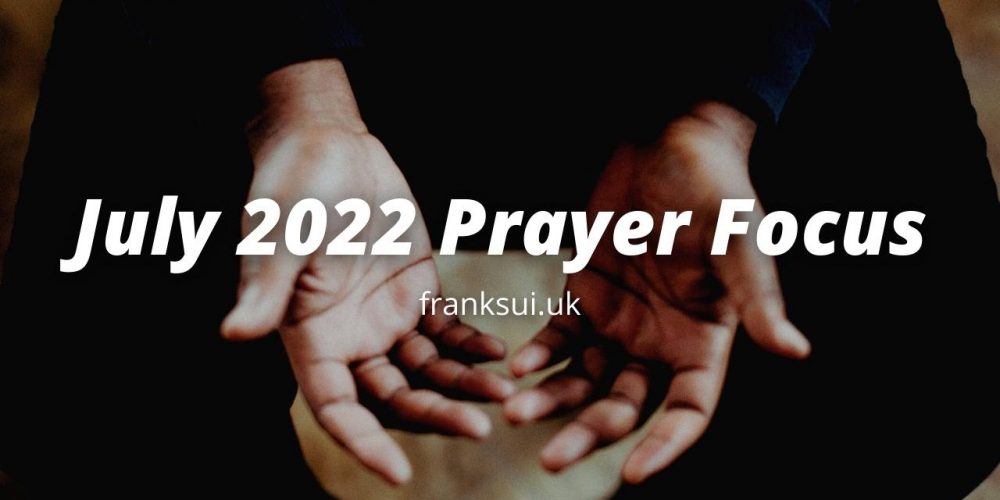 Recently the Lord put on my heart to start posting monthly prayer focuses. I’ve always had different prayer focuses & assignments each season, much of it is not shared. Since a big part my job is to pray, I thought it would be good to invite everyone into some of what I am praying into. These are not prophetic words, but what I believe the Lord is highlighting for prayer. I will be updating this every month, and if there is an urgent prayer update I would update as soon as. Below is the prayer focus for the month of July.

Praying Through the Current Leadership Elections

Earlier this month, PM Boris Johnson resigned after 60 government resignations in two days, triggered by the resignation of two senior government ministers, Chancellor Rishi Sunak and Health Secretary Sajid Javid. I had the joy of meeting the former Chancellor last month and took the opportunity to share the word of the Lord sealed in an envelope, for which he greatly appreciated and promised to read. Without going into what I shared with Mr. Sunak (I did not tell him to resign), both my pastor and myself believe that he acted on what was written in the prophetic word.

Meanwhile, Health Secretary Sajid Javid attended a Parliamentary prayer breakfast on the day of his resignation, where he heard a message from the founder of Street Pastors, was deeply convicted and could no longer stay in government for reasons of integrity. Both Sajid Javid and Rishi Sunak resigned with a few minutes in between, triggering 60 government resignations.

Rishi Sunak is now running for Conservative Leadership and Prime Minister, and is currently going head to head with Liz Truss. I have been speaking with two prominent prophetic ministers in the last few days, and both of them saw the mantle of Thatcher descend on British politics. This revelation sits well with me. One of them saw a woman rising to replace a government minister with the mantle of Thatcher. This seems to point to a female PM, but the other one who saw the mantle of Thatcher also saw a “foreigner” lead the country, something prophesied by Tomi Arayomi. Rishi Sunak is of Indian descent, and Liz Truss (a Caucasian woman) has been compared to Thatcher in the Media headlines. (See here, here and here.) At the same time, both Rishi and Liz are considered “Thatcherites”, meaning they both support the political and economic policies of Margaret Thatcher.

Here are a few things I believe God is highlighting for us to pray:

1. Pray for the Thatcher Mantle

None of us are willing to call the next Prime Minister. What we have is in fact two possible outcomes, both were confirmed in some ways and both are going head to head. Which means much of what’s happening is not settled in the Spirit. I think the Thatcher mantle (or the “foreigner” for that matter) is not limited to the PM position. What is sure, is the Thatcher mantle God is releasing to bring this nation back into alignment. We pray for the Thatcher mantle to fall on the right person.

2. Pray for the Anointing associated with the Thatcher Mantle

Connected to the Thatcher mantle there is an anointing to bring alignment to the UK. There is a strong political spirit, the spirit of competition and backstabbing in the Parliament right now. This is muddying the waters quite a bit. I am reminded of Genesis 1, where the Spirit of God hovers upon the waters of chaos – then God spoke, and order came out of chaos. Similarly, I believe the Lord is calling us to see with our mind’s eye, our sanctified imagination, the anointing hovering over the election process, and declare God’s order and speak it into the situation.

Many people are looking for a Jehu in the next leader and PM. I do not believe the next leader will be quite a Jehu yet, as I don’t believe the UK is ready for a Jehu, because the Church is not ready as an Elisha. Based on what I said to Rishi Sunak before and how things have unfolded, I do think he has a high chance of becoming PM. But Rishi (and the establishment) as they currently stand are still very much an Ahab. But prayer can change hearts. Rishi does carry a weight and a “centre of gravity” which comes from the Lord. What he does with it is up to him. So we pray for repentance. Should the Lord give him victory, it would be to show him that He is the LORD. (1 Kings 20:23) This is what I am praying for regarding Rishi – that his heart would recognise the Lord and he would harken to the prophetic voices that reveal the God of Israel.

All in all, we pray for the UK to be delivered of the Ahab spirit, and believe that the Lord is orchestrating things unto that. It may take some time, and it won’t be immediate. But it will come.

I don’t feel comfortable about either of these two. I have felt that I should be praying for Kemi Badenoch, a woman of foreign descent, and the Lord has answered prayer for her in wonderful ways. Could the one of the two being offered to the party voters be a caretaker?