A Call to Prayer for President Zelenskyy 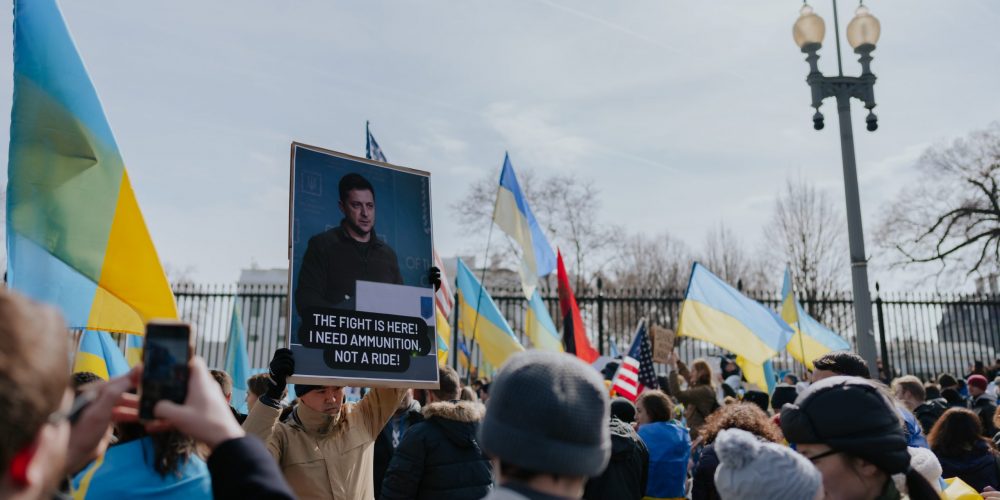 On Sunday 27th of February I had a dream. In this dream, I received a new rifle in the middle of the night and began to practise shooting in my front garden. As I pulled the trigger, it shot the neighbour across the street. I quickly ran across to make sure he was okay. It turned out to be a taser bullet with a wire attached. After I returned, the man whom I shot crossed over with his wife and came into my house. He was very angry, and he turned out to be President Zelenskyy of Ukraine. Zelenskyy and his wife walked to the kitchen at the back of the house, at which point I knew he had forgiven me.

After some prayer and consulting other prophets and intercessors, we agreed that this dream spoke of Ukraine’s destiny and it pertains this generation. The rifle speaks of targeted intercession – we are to target Ukraine with prayer in this dark time. My house represents the House of the Lord, and in the dream, President Zelenskyy crossed over and entered it. This speaks of a harvest of Ukrainian souls into the Kingdom. The anger on President Zelenskyy’s face speaks of the issue of anger and bitterness which the Lord is dealing with in Ukraine. He is bringing souls into the Kingdom, healing their hearts and preparing them for a greater harvest in Europe and over the Earth. The kitchen speaks of preparation of spiritual nourishment, but also the Communion Table. In real life, my house has a large front garden which one has to cross in order to get to the house itself, and the kitchen is at the very back of the house. It is very similar to the structure of the Tabernacle: the Outer Court, Holy Place and the Holy of Holies. In the dream, the Lord took Zelenskyy and his wife straight into the holy of holies, into the kitchen, to the Communion Table and brought healing and forgiveness to their hearts.

I also had a strong sense that Zelenskyy not only represented Ukraine as a nation, but also himself. I felt as though I was not only to target Ukraine with prayer, but Zelenskyy himself. As I did, I heard the Lord say, “I am encountering Zelenskyy at this time and raising him up as a Moses to deliver Ukraine politically and speak to this generation prophetically. For I am raising up a generation like Moses to be spiritual deliverers to bring nations from bondage to freedom, just as I have raised up Zelenskyy as a political deliverer.”

Meanwhile, my friend Saskia Metz in Switzerland was praying for Ukraine, and heard the Lord proclaim, “Moses arise! Moses arise!” The Lord spoke to her that a generation is rising like Moses to deliver nations from darkness into the Kingdom.

On the 18th of March, another friend, Canon Andrew White, came on my podcast. In the episode, he stated that he believes the Lord is raising up President Zelenskyy as a prophet, not knowing what He had spoken to me and my friend.

I posted this word on Facebook on the 20th of March saying: “The Lord says to Ukraine: ‘Not by might (NATO) nor by power (EU), but by My Spirit.’“

The next day, Andrew posted, “SO TO UKARAINE [sic] G-D SAYS IT IS NOT BY THE MIGHT OF NATO OR BY THE POWER OF THE UN BUT BY HIS SPIRIT THAT PEACE WE BE RETURNED.“

Andrew confirmed he did not see my post. God spoke to us independently the exact same word, with similar wording. I believe this speaks of a freeing of the political spirit in Ukraine.

I believe there is a deliverance coming, and God is calling the Body of Messiah to stand in agreement in prayer. There is a deliverance of nations both politically and spiritually, a freeing of the political spirit in Ukraine, the rise of a generation like Moses, all unto a global outpouring of the Spirit and a harvest of souls. And it all begins with targeted prayer for President Zelenskyy and Ukraine.

The Lord confirmed all of this before we realised that Passover was approaching.

I believe the significance of this year’s Passover cannot be undermined. I have been saying for two years now to watch for the opening of Degania Dam near the Sea of Galilee. In 2019, I was fasting and praying with an Israeli friend for revival. In travail, the Lord spoke to me that a “Global Passover“ was coming and a generation would walk out of Egypt, through the Red Sea and into the Promised Land. Meanwhile, my friend sensed “water breaking” in the Spirit in the “birthing” of this move of God. The Lord said it shall happen, and showed me a dam breaking open near the Sea of Galilee which shall serve as a sign. I did not know there was a dam at the Sea of Galilee, which had not been opened since 1995.

One key prophetic principle we need to understand is: whatever happens in Israel prophetically is always an indicator of what God wants to do in the nations in multiplied measure. In 2020, the earth experienced a Global Passover, during which the Sea of Galilee had hit its highest water level since 2004, making the authority consider opening the dam. So the water in Israel was about to break, while the nations of the earth were going through a travail. What God had on the other side was an unprecedented Global Outpouring of the Spirit. But unfortunately, a generation did not heed the prophetic and stayed in Egypt. The dam did not open, except some water was let out; similarly, a small number of people did believe and embarked on a journey into the Promised Land. Early this year, the Lord said that 2022 will be “the year of second chances” and a repeat of 2020. While the enemy will replicate some of the dynamics of 2020, God is giving us another chance to respond in faith and courage. Just a week ago, the Sea of Galilee had risen even higher than 2020, at its highest water level in 30 years – just as Passover approaches. According to the official website it is only 30cm from the upper red line, and still rising at the rate of 6cm/week. At this rate, we may see the dam open sooner than we expect.

I believe Passover 2022 will be another Global Passover. There is a special grace at this time for us to intercede for President Zelenskyy, for Ukraine, for this generation, unto the deliverance of nations, the rise of Moses politically and spiritually, and Global Revival.

Join myself, Saskia Metz and Canon Andrew White LIVE on Friday 15th of April at 6pm GMT for a very special Online Passover Experience as we celebrate Israel’s deliverance from Egypt and pray for President Zelenskyy, Ukraine, Russia and the nations, and prophesy freedom and deliverance over this generation.

113 Shares
PrevPreviousDREAM: Joe Biden is Escorting the Church to its Place of Authority
NextThe Altars of Baal Are Being ShakenNext
Subscribe
Login
2 Comments
Oldest
Newest Most Voted
Inline Feedbacks
View all comments

Yes we are in a season of Passover!Chuck Pierce says there will
Be many obstacles that we must Passover in order to reach our Promised land.And here we are coming out of Covid restrictions at Passover 2022-2yrs from going in at Passover 2020 which I declared to all my friends!blessings Frank for sharing this very significant dream and word!

Powerful word Frank, I can relate to some of what you have have mentioned indeed.Let the waters break forth Lord